Automating perimeter security and site surveillance in an outdoor environment is particularly complex, because it implies being able to observe the surroundings.  The ability to adapt to unpredictable weather conditions. To navigate uneven ground. Detect a static obstacle. React to a moving obstacle. For humans, these are acquired, everyday and automatic skills. They are also skills that have been acquired recently by a new generation of surveillance robot.

A surveillance robot has strengths and limitations, so it is important to determine appropriate tasks and decide how humans will fit into this new surveillance equation.

Robots have already been accepted in the industrial landscape, where they now work daily alongside operators on production lines. The robots are chosen for repetitive, difficult and dangerous work, for example handling of heavy loads. It is a technology that frees up operators for higher value-added tasks requiring their expertise and dexterity.

Industrial site surveillance is a key field for robots. Why? Because it is also an environment where combining the characteristics of a robot (robustness, endurance, ability to work 24/7 in all weather) with the intelligence of humans (risk assessment, responsiveness) makes perfect sense.

But not just any robot

To meet outdoor security needs, surveillance robots must be autonomous (no human intervention) and intelligent. They must be able to understand their environment, perceive obstacles (a car, person, facility) and adapt. An autonomous surveillance robot will allow you to reliably and continuously monitor an extended security perimeter.

Such robots, equipped with sensors and HD cameras, are designed to carry out patrols and dispel doubt. But they can also capture images and communicate information in real time. And because a surveillance robot delivers accurate data, it is a valuable decision-making tool for site security teams.

No single technology can currently serve as a security system. A system that relies solely on cameras and automated surveillance tools would be predictable, circumventable and ineffective.

These robots are designed only to carry out inspections and communicate information. Human intervention remains essential.

In some situations, collaboration between humans and autonomous robots is even vital.

An incipient fire. An explosion. Release of toxic agents. Site intrusion. Theft of equipment. Water damage. A technical failure. An abnormally high temperature…  In all these situations, sending a robot into the field as a “scout” will above all keep employees safe. The on-site team can then assess how dangerous the incident is. A fully autonomous surveillance robot can dispel doubts and provide you with detailed information on a specific area.

Whatever the situation (malicious act, natural disaster, technical failure, etc.), an autonomous surveillance robot offers the advantage of being able to undertake missions dangerous for humans. Your employees can then analyse the situation remotely and in complete safety, and give instructions (e.g. human intervention unnecessary, or intervention by security guards or a maintenance team).

Moreover, robot intervention is a powerful deterrent for intruders. Although harmless, they have a psychological impact that reduces the risk of malicious acts.

In some contexts, a human-robot patrol can protect an isolated worker and be more dissuasive than a patrol carried out by security guards or robots alone.

Portrait of the GR100: an operational surveillance robot “made in France”

Designed to ensure site perimeter security and carry out preventive maintenance at facilities, the GR100 surveillance robot has a four-wheel drive chassis and can cover all types of terrain in all types of weather. The robot is also equipped with 6 cameras: 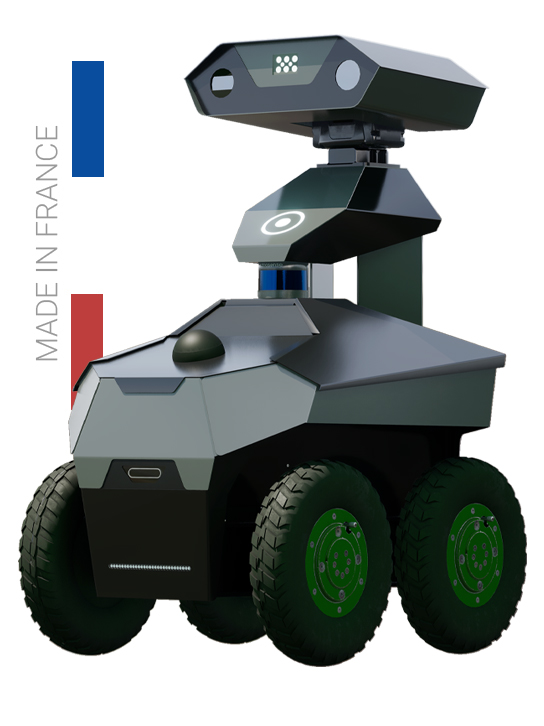 The GR100 autonomous robots integrate easily into existing work processes, and can be used for routine inspections or to provide crisis information in emergencies. They will automatically avoid obstacles and ensure operator safety. They respect no-go zones and speed limits.

The GR100 surveillance robot is designed to address your major security concerns: site perimeter security (intruder detection, real-time alerts) and facility inspections (remote measurement of points of interest, alerts when thresholds are exceeded). And because the robot is already at the scene, it can send information to operators in real time. Guards can also use the robot to communicate directly with intruders.

Finally, in the event of an accident or in case of danger, this mobile robot can carry small loads in its compartments (first aid kit, defibrillator, fire extinguisher, etc.) to bring help to humans.

Recent developments in “intelligent” and “autonomous” robotics are opening up new avenues in the fields of surveillance and security. As in the production industry, tools and processes must be updated to remain competitive.

Simply assess the risks to then set up an optimal and versatile security system for your site. Combining these new technologies with an indispensable human presence is your safest bet.

Our team of experts will be happy to help you with your project.